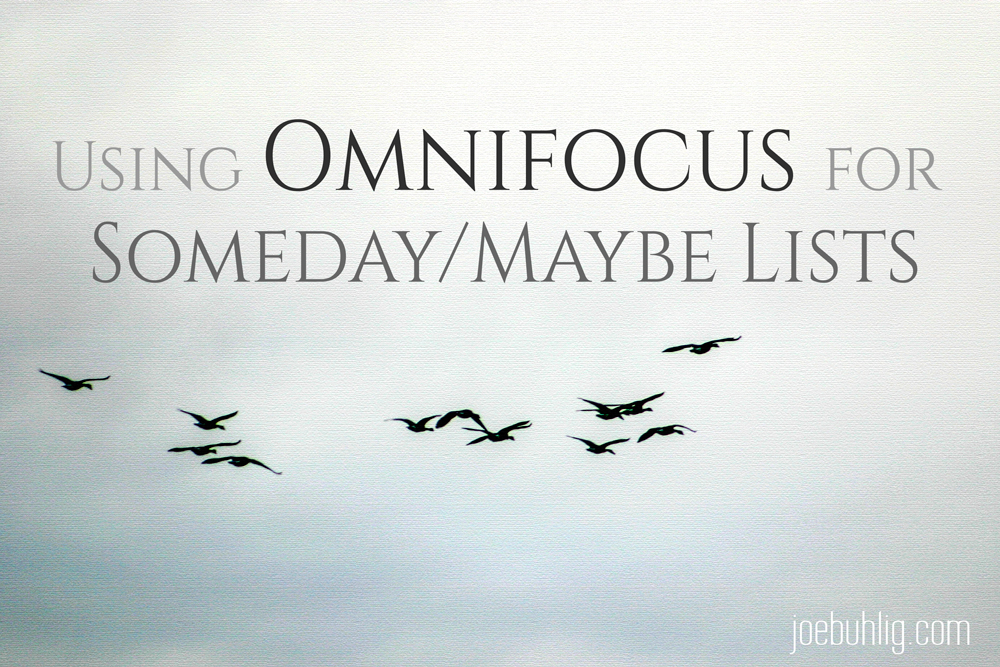 For a long time, I kept my active Next Actions in Omnifocus and my potential (someday/maybe) actions in Evernote. It worked, but it felt a bit cluttered so I moved it all into Omnifocus.

Why keep someday/maybe lists in Omnifocus?

The main reason I wanted someday/maybe lists in Omnifocus was the ease of activating them. It’s pretty common for me to pull items from these lists each week and spell out tasks for them. If they’re already in Omnifocus, it’s easy to change the project/context of the task or turn it into a project.

My secondary reason was to streamline the apps I used in my GTD setup. Omnifocus held all of my active tasks and projects while Evernote held my goals, someday/maybe lists, and reference materials. It worked, but it never felt smooth.

The altered setup brought my goals and someday/maybe lists into Omnifocus. The goals portion was simple, but the someday/maybes were more of a challenge. I prefer to collect these directly to their respective lists. As far as I know, there’s not a way to enter text (without entering a project/context) and have it auto-process into the right place in Omnifocus. So I made my own:

In practice, here’s what I do:

Behind the scenes, here’s what happens:

Requirements: Drafts app, Pro version of Omnifocus for Mac (you do not need the iOS app to make this work).

This process could be used with IFTTT or any other system that sends an automated email. As long as you can get the formatted subject line into the email and send it to your MailDrop address, the script will handle it. I’m using Drafts to do this since it’s my main digital capture tool.

Here’s an example of the full syntax you can use in the subject line:

This creates a flagged task named “Fix bathroom wiring” with the context of “After Hours and project of “House/Car - SA”. Its start date will be Friday with a due date of next Monday. The time estimate for it will be 30 minutes and the note will be “It’s driving me crazy.”

Since Omnifocus already has a Review process built in, these lists are easy to add. Select all of these lists and set the review period to every week and the review date as the next day you’ll do your weekly review. Each week when you take time for the weekly review, these will automatically be in the list of projects.

The best part about having someday/maybe lists in Omnifocus is the ease of activating items from them. When I review these lists and find a task I’d like to take on or need to complete soon, I can change the project/context that are assigned to it and it falls in place immediately.

This has been great for me. It’s removed the resistance I had to reviewing my someday/maybe lists and streamlined the process of acting on them when I decide to say “yes” to something. It also frees my mind. It’s one less app I need to look at when I’m trying to find a potential action item.

Update: If you're interested, I have an update to the process I'm using for this that you can find here.