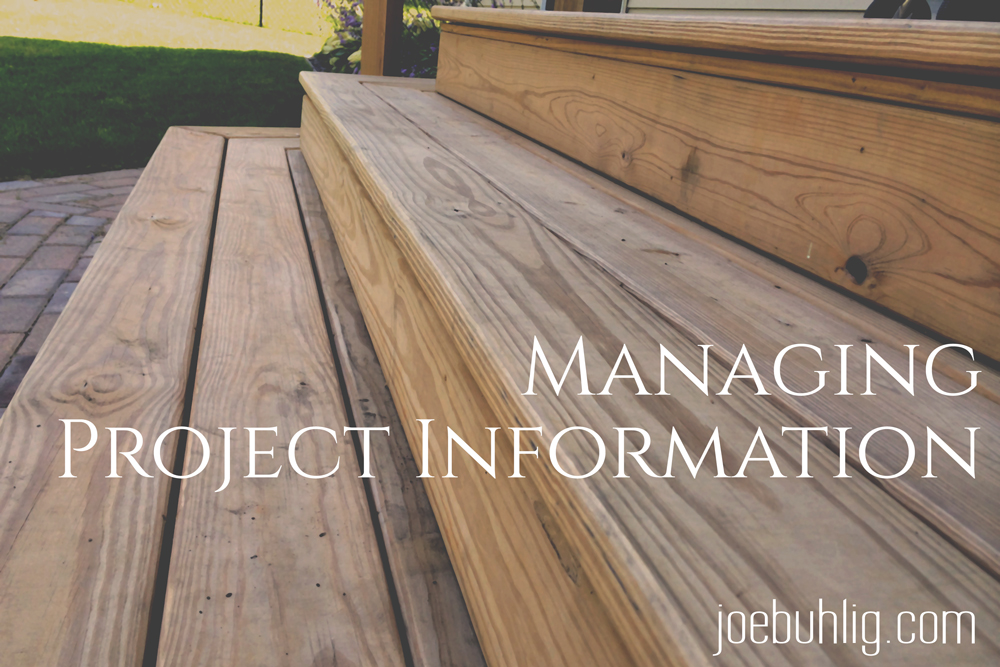 Using David Allen’s definition, a project is anything that requires more than one action to complete. This can range from building a new web application to replacing the refrigerator filter.

With this definition in mind, it’s easy to see how your list of projects can be long. And being a knowledge worker, I have thousands of files and hundreds of meeting notes and whiteboard pictures — all of which are digital. Here’s a scenario:

Last summer I built a deck off the back of our house. I like doing handyman projects and I was looking forward to the challenge. Since I didn’t know what I was doing, I did a lot of research on the design and how to build it.

I planned out the actions in Omnifocus and clipped about a hundred pictures and how-to articles from the web into Evernote. I also had some files that I downloaded to reference during the build. I had a lot of information before I had even started — and this was only one project. I usually have about 50 going at once.

There were a number of times when I spent an embarrassing amount of time looking for a picture I had clipped.

Now multiply this by 50 projects. It can quickly become a mess. I spent a lot of time working on this problem, since I knew it wouldn’t go away. Eventually, I found a solution that I’m rather fond of.

Where do you put it?

The first step is deciding what type of information goes where. For me, that means action items go into Omnifocus, files go into Dropbox with my file nomenclature, and everything else goes into Evernote. I highly recommend using as few places as you can for information. It reduces the number of places you’ll have to look later on.

The next step is to find a way to quickly pull up the data for a project. I experimented with this for a while and eventually came up with the idea for personal project codes. We use them for business all the time. Why don’t I use them for me? Seems logical.

The idea is simple. Append a project code to the name of every project in Omnifocus, note in Evernote, and the filename for a file. Because it becomes part of the names in each of these, I tried to keep mine as short as possible.

Decoded, the “14” is for the year 2014. “HC” stands for House/Car. It’s a 2 character indicator for the area of responsibility in my life. I have 11, but a few of those are “WK” for work, “HU” for husband, “BL” for this blog, and “FR” for friend. The last two characters in the code is an auto-incrementing number. I use a TextExpander snippet to create my codes and it automatically increases this number by one every time I create a new one. I’m writing a post on this snippet to come out next week.

I create the code the first time in Evernote when I name the project. For the deck, the note was titled "14HC13: Build Deck” and contains any initial ideas, outcomes, or brainstorming. I do this for every new project. This is key because I can search Evernote for the code of the project I want. But in most cases, I’ve worked with the code long enough that I just know it.

Because the code is in the name of the item, I can search for it and pull up just the information for that project. I can see all of the notes I’ve taken for a project or all the files I’ve collected. I’ve even been exploring Path Finder and trying to find ways to pull up Omnifocus, Evernote, and my files all in a single search.