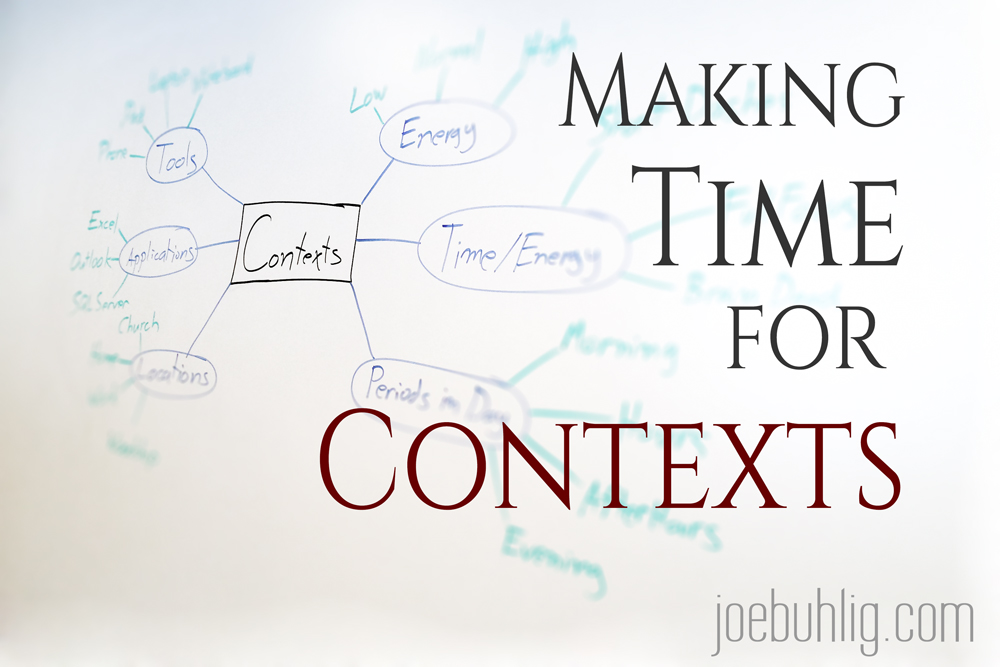 The difficult part of Getting Things Done (GTD) for me is contexts. What lists should I be using when I'm completing tasks?

It's a question that a lot of people have asked. The book mentions things like Calls, Computer, Errands, Office, and Home as suggested contexts. But I always have a phone with me. So I can always make phone calls. I work from home. So Office and Home are one and the same. My phone is a computer. So I always have a computer on me.

I've tried a number of different concepts with contexts. I wanted something that made sense in our world today. With so many tools accessible at all times, I needed an easy way to break out my actions. Here are my failed attempts:

I originally tried listing actions by the tool it took to complete them -- Laptop, iPad, Phone, Whiteboard. But I had to pick a tool to use for an action and many times had multiple tools in front of me at a time.

This seemed logical. Since a large portion of my work is on the computer, I made lists for the apps that I would use to do the task -- Excel, SQL Server, Outlook. But I could easily launch any and all of them whenever I wanted.

I was excited about this one at first. Everything is based on where I am -- Home, Work, Woodshop, Church. But I quickly realized that the lists for Home and Work could get long. It was depressing to see a list so long and I couldn't decide what to work on.

Now we're getting somewhere. Break out your tasks based on how much energy you have -- Low, Normal, High. I really wanted this to work. But the line between each was blurred. It's hard to tell when I'm transitioning between Low and Normal or Normal and High.

I stole this one from Sven Fechner at Simplicity Bliss. They are a combination of how much energy and time you have for the task -- Short Dashes, Full Focus, Brain Dead. I like how Sven uses Omnifocus so I spent a lot of time trying to make this one work. But again, I struggled to see the lines between one context and the next. I could never see when to switch contexts.

Periods in the Day

This one actually worked for a while. I had lists for the time of the day -- Morning, Hours (when I was working), After Hours, Evening. But the lists were too long for me. I had a hard time deciding what to do with 30+ items on each list. I need more granularity than that.

Here's what I learned throughout my experiments.

After a couple hours with a whiteboard I realized I like to see my tasks by the type of action needed to complete it. What verb do I need to do in order to check it off? My new contexts are:

Once I had these determined, I noticed two things. One, I really like seeing my tasks broken out by these verbs. Two, I had no idea how I would know when to switch from one context to the next.

I was listening to a Workflowing podcast where Patrick Rhone posed an interesting question, "If not now, when?" Patrick later wrote about it on his blog.

The premise of the question is this: if it's important enough that you've decided to do it, when are you going to do it?

After listening to the podcast and reading the article, I wondered if that was the missing piece to this whole thing. I had my lists, but I have always struggled with knowing when to work on which list. What if I scheduled time for each list?

This might be why the Periods in the Day idea almost worked. If I know what time of day I work on each list, I'll proactively go to that list and work on it. Simple.

It took some tweaking, but I eventually determined the best time of day for each verb. I write in the late morning and do my thinking right before lunch. I do some learning right after lunch. As long as I stick to the schedule, I know that I'm in the right mindset at each time for the tasks I'm taking on.