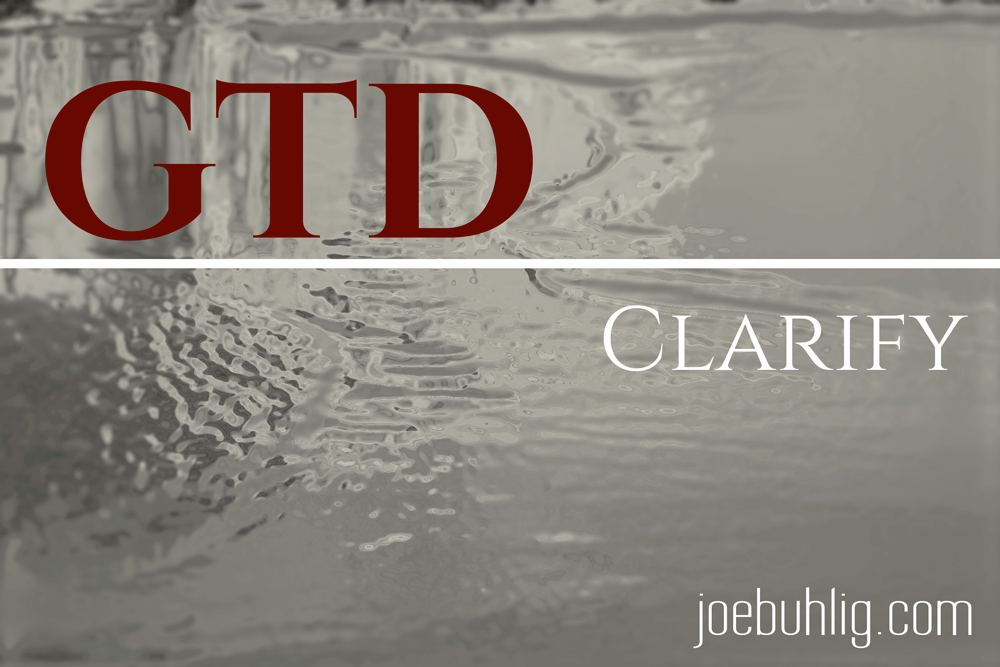 A lot of people write things down but fail to do anything with it afterwards. It just dies on the paper. Why write it down if you'll never look at it again?

At this point, you’ve implemented the habit of Capture. You’re collecting things in your inboxes and you’re ready for the next step — Clarify.

Clarify is the process of taking each item in your inbox and making a decision about it. You’ll empty your inboxes by deciding what you need to do with each item in them.

There are eight places that you can put these items. To help visualize this, here is a link to the workflow map from David Allen that shows the process. Here are the eight buckets:

Throw it out. Honestly, if you’re never going to do anything with it and you don’t need it for reference, get rid of it. There’s no need for it to stick around and clutter things up.

You wrote down the name of a book you want to read, an app you want to try, or a business deal you might want to make in the future. They’re items that you want to keep track of but don’t have time for right now. Keep Someday/Maybe lists of those items. You’ll want to come back to them when you have the bandwidth later on.

A tickler helps you remember something that you want to make a decision on or use at a later time. There's a concert in the local park that you might want to attend, but you’re not sure. You need a way to record that item and have it come back to you at a time when you can make a better decision. Or you may have information like a hotel confirmation that you don’t need to see until check-in. The tickler is a way to do this.

There are always items that we need to hold on to indefinitely. Manuals, house closing papers, statements, confirmations, etc… You need some way to keep track of it all. Create a place where you can store this information and do it in a way that makes it easy to find what you’re after.

I’ve found this to be an important bucket. It’s a list of all the items that you are waiting to happen. You might be waiting on a package to arrive or you need a coworker to complete a task. Keep a list of the things you’re waiting for.

This is the big one. A large portion of the stuff you’ll right down are actions you need to take. You have to put them on lists that you’ll work from. And those lists are based on contexts.

Contexts are lists of tasks that are organized by the tools, mindset, energy, or time you need to complete the action. You can think of contexts as tagging the action so you can consolidate them later. Here are some examples:

The calendar is something that most of us have used for a long time. But what do you put on it? The only thing you should really put on your calendar are items that you’re committed to doing at a specific time in the day. To-dos that don’t have a time associated with them need to be on your Next Action lists. Keep your calendar true to your commitments. It becomes the hard landscape that you follow for the day.

Keep a list of the projects you’re working on. Remember, a project is defined by having two or more actions in order to complete it. Even changing a light bulb could be a project if you need to buy the light bulb and then replace it. That’s two steps and would be called a project.

If you maintain a list of these projects, you don’t have to worry about forgetting to complete one of them. You also have a point of reference for making decisions on what comes next for the project.

Deciding on the bucket

The nice thing about the Clarify step in the workflow is that it has it’s own process to help you decide what to do with the stuff in your inboxes. It becomes intuitive over time, but starting out I found myself referring to this workflow map a lot. Here are the four questions to ask yourself when deciding where to put each item:

Go to your inbox and pick the first item. What is it? Sounds like a simple question, but it’s sometimes harder to decide than you think. Is it a manual, a random thought, or a business idea? You can’t decide what to do with it if you don’t know what it is.

Is it something you need act on? If not, do you need to hold on to it? If the answer is no, trash it. If you need to keep it but don’t need to act on it right away, you can put it on a Someday/Maybe list for later, store it in your Reference system, or add it to your Tickler.

If it is something you need to act on soon, what’s the next action?

By asking the simple question, “What comes next?” we're changing the noun into a verb. We’re taking “New furnace” and turning it into “Google reviews for a new furnace.” What is the next physical thing you need to do in order to make progress on it?

Is there a phone call you need to make? Do you need to pick something up at the store? Is there an email to send, a file to create, a book to read, or an article to review? Do you need to Google something? The action can take a lot of different forms, but identifying it is key.

Pro tip: Try asking this question at the end of meetings or at the end of a conversation with someone. It can change the pace of your work and provide a lot of clarity.

With the next action decided, you have three options — do it, delegate it, or defer it.

If it’s possible to complete the action in two minutes or less, do it right then. It’ll take you longer to store it and come back to it than it would take to do it right away. So get it out of the way.

Maybe you’re not the right person to be doing the action at all. If that’s the case, then you need to take the action of giving it to someone else and store it on your Waiting For list.

If it’s an action that has multiple steps, add it to your Project List. You don’t want to complete the first action item and then lose track of the stuff that comes later.

The Clarify step is probably one of most helpful steps in the workflow because it helps get things out of your head and into an external brain of some kind. It helps you clear your mind and opens up your creativity.

The next step in the workflow is Organize. It’s important to organize each of these buckets in a useful way, and there are a LOT of tools available to help.